In Memory of
Albert "Michael"
Vaitkus
1954 - 2019
Click above to light a memorial candle.
Memorial Candle Tribute From
Solfanelli-Fiorillo Funeral Home Inc.
"We are honored to provide this Book of Memories to the family."
View full message >>>
Send Flowers
Plant a Tree In Memory of Your Loved One
Click Here
Menu 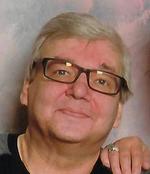 Albert “Michael” Vaitkus, 64, passed away peacefully at home on Friday, Jan. 25, 2019. He is survived by his wife of 42 years, Theresa Trunzo Vaitkus, who was the love of his life, and they were high school sweethearts.
Born in Scranton, son of the late Jean Stumm Belskis and Albert A. Vaitkus, he was a 1973 graduate of Scranton Technical High School and attended Penn State University. He was a member of St. Ann’s Basilica Parish and was an avid Penn State football fan and was a season ticket holder for many years. He worked in private industry as an electrician and retired from the Tobyhanna Army Depot. He was a member of the Moosic Lodge 664 and dual member of Acacia Lodge 579.
Michael, as he was known to his family and friends, was very kind hearted and loved to joke and always had a quick comeback. He and his wife enjoyed many years of cruising.
Surviving in addition to his wife are two sisters, Cheryl “Susie” Kleszyk, Scott Twp.; and Mary “Lisa” Paszek, Scranton; brother, and lifelong friend, Michael Price and wife, Lisa, Scranton; nieces; nephews; great-nieces and nephews; and Godchildren.
He was also preceded in death by his stepdad, Harold “Hoppy” Davis.
The funeral will be conducted Tuesday from the Solfanelli-Fiorillo Funeral Home Inc., 1030 N. Main Ave., with Mass of Christian Burial at 11 a.m. in St. Ann’s Basilica Parish, 1250 St. Ann St. Interment will follow at Cathedral Cemetery.
Family and friends are respectfully invited to pay their respects Tuesday morning starting at 9 until 10:30 a.m. at the funeral home.
In lieu of flowers, donations may be made to St. Ann’s Basilica Parish, 1250 St. Ann St., Scranton, PA 18504; or Tracey’s Hope Hospice Care and Rescue for Domestic Animals, 113 Foote Ave., Duryea, PA 18642.