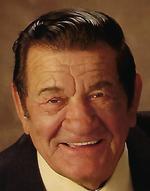 John R. “Ski” Vinskofski Sr. of Clarks Summit formerly of Scranton died Wednesday June 14, 2017 at Geisinger Community Medical Center after being stricken ill at home. His wife is the former Louise Emiliani, the couple would have celebrated their 64th wedding anniversary June 20.
Born in Scranton, he was the son of the late John and Stella Loyek Vinskofski;
He proudly served in the United States Navy aboard the USS Midway.
Prior to his retirement he was employed as a custodian by the Abington Heights School District, he had previously worked at the Wallace Murray Company of Scranton and also worked as a truck driver.
John had the ability to be able to fix anything he set his mind on, he was always willing to go out of his way to help anyone in need. He enjoyed hunting, fishing, and gardening, but most of all he loved his family very much.
Also surviving are his children, Gail Hughes, Kathy Carmadella and husband Richard, all of Scranton, Cheryl Mitchell and husband Wesley, John Vinskofski Jr. and wife Sharon, all of Newton; a brother, Leonard Vinskofski and wife Lydia, Scranton; a sister, Lillian Bellucci, Peckville; 12 grandchildren; 28 great grandchildren; nieces nephew, and numerous in-law.
He was preceded in death by a granddaughter, Shayne Hughes, two sisters, Elizabeth Emiliani, and Arlene Gursky.
The funeral will be conducted Tuesday from the Solfanelli-Fiorillo Funeral Home Inc., 1030 N. Main Ave. with Mass of Christian Burial at 9:30 a.m. in The Church of St. Benedict, 1849 Newton Ransom Blvd. Clarks Summit, Pa. Everyone wishing to attend funeral is asked to go directly to church. Interment in St. Stanislaus Cemetery will follow. Relatives and friends are invited to pay their respects Monday starting at 4:00 p.m to 7:00 p.m. at the funeral home.
Memorial contributions may be made to St. Jude’s Children’s Research Hospital, 501 St. Jude’s Place, Memphis, TN. 38105, or to St. Joseph’s Center, 2010 Adams Ave. Scranton, Pa. 18509.